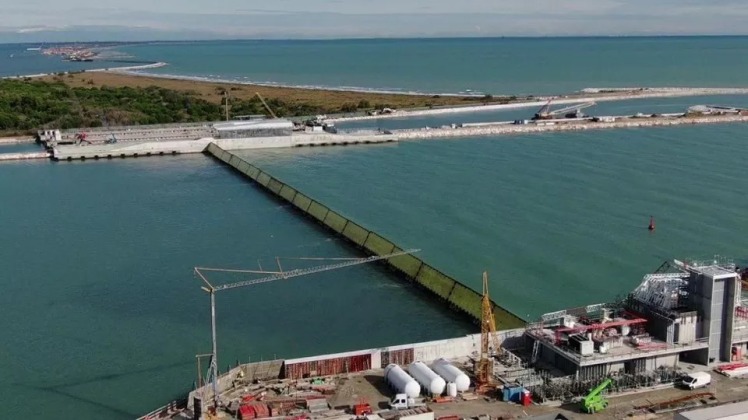 VENEZIA. “The wear on MoSE is more concerning than predicted”. So says the Superintendent of Public Works, Cinzia Zincone. In recent days she has been checking reports and feedback from technicians regarding the state of health of the large project. After the tests went well, MoSE is by no means finished. The proof is seen in the dangerous conditions of the tubes, paints, underwater mechanisms and in the galleries in the caissons which are being attacked by corrosion.

These are problems that La Nuova has reported for years, which are now coming to light. It means greater costs – such as for the replacement of the valves, discovered to be defective – and lengthening time frames. “Commissioner Spitz says that it will all be finished by 31 December”, said Mayor Luigi Brugnaro, “but I have strong doubts, having seen its state of preservation”. The responsibility can be charged to the construction companies, for the choice of materials that have been shown to be less resistant than what was specified in the design, beginning with the corroded hinges, and also to the most recent management, for the accumulated delays.

It is a controversy between the special administrators and the supervisory board, which in every case slows the rush to enthusiasm of those who are ready to call MoSE done.

Now the Consorzio Venezia Nuova will be dissolved. Within a few day the ministry should announce the decree appointing the liquidating commissioner, provideded for by the new law concerning the Authority. This is, as announced by Minister Paola De Micheli via Twitter on Saturday evening, Venetian CPA Massimo Miani. The tweet provoked the resignation of Giuseppe Fiengo, with a letter to the Prefect in Rome.

Miani will have to check the status of what remains of debts and disputes, and transfer resources to the new institution. Now the search is on for a president. The name coming from Rome – and the PD – is that of Elisabetta Spitz, former central Director of the Demanio and for a year the “Sblocca cantieri” Commissioner of MoSE [Ed. Note – this position was created to “unblock the shipyards” and get work on MoSE restarted after a fairly long stall]. She gained notoriety with the experimental raising of MoSE on 3 October, a day with acqua alta. She enjoys the full trust of De Micheli and the “non-hostility” of Zaia. Regarding Brugnaro, that is yet to be seen. But in recent days he has returned to attacking the government for the way in which it approved the law regarding the Authority – “a disgrace” he said in City Council.

Will Spitz be able to be nominated to the leadership of the new Authority? Doubts have been expressed from various quarters. Spitz is retirement age, about 68 years old. And retired State executives are not compatible with such leadership functions.

The environmentalists are appealing to Prime Minister Conte. “What is needed is a person with a deep understanding of the environment and the lagoon, not only of MoSE”. “If it must be a retiree”, they wrote, “we have skilled people here in Veneto who have served in the leadership of State technical services, such as the former Director of Hydrography Antonio Rusconi and the former director of the Bacino Authority Francesco Baruffi. There are also other names circulating like that of the former Rector of IUAV Amerigo Restucci, or Perfrancesco Ghetti and Luigi Zanda”.