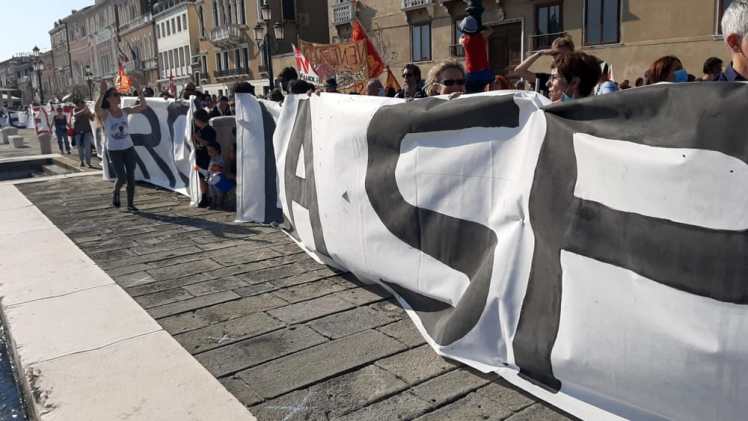 Today, Saturday 13 June, the No Grandi Navi group was back on the scene at Zattere, this time with an “extended family” which has also embraced the subjects of housing, the proposed incinerator at Fusina, and the tourism monoculture in the Lagoon city. Different sensibilities but a single commitment: protest speculation, pointing at a model of a livable city on a human and residential scale. “Thousands of people are here in Venice today to send a message about the importance of caring for this city which is saying “enough”. Enough speculation on the land, the health and the lives of the people”, said the activists. This is the second human chain in Venice in the post-Covid phase, after the one on 1 June which gathered hundreds of militants of the Committee for the area ex-gasometri, and citizens who gathered together against the building of a luxury home in Castello and against new docks for gran turismo ferries on Fondamente Nove. 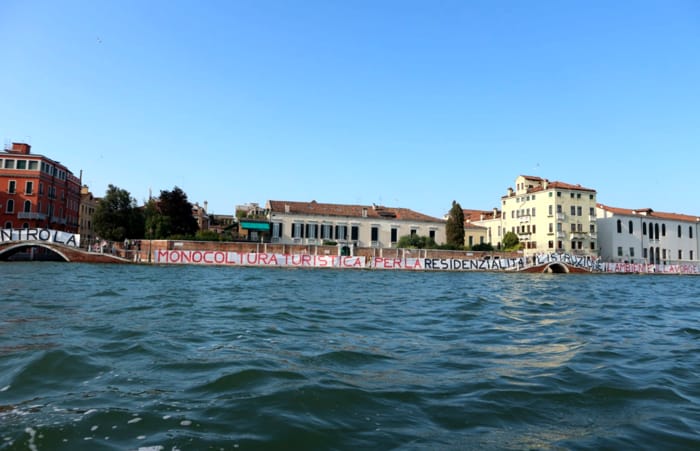 Today’s demonstration was launched in recent days along with Opzione Zero, one of the groups protesting the completion of the third line of the of the Ecoprogetto incinerator at Fusina. A regional VIA (environmental impact assessment) was requested and obtained for the project. However, now the Councilor for the Environment for the Veneto Region, Gianpaolo Bottacin, wants a meeting with the government, and with Environment Minister Sergio Costa to move on to the next step: the AIA (Integrated Environmental Authorization). At the Zattere we found a delegation from the M5S, among which was City Councilor Elena La Rocca: “We must take the city back in hand – she said – to safeguard our health and make environmentally sustainable choices. Otherwise we leave it in the hands of profit and private interests. They are building incinerators instead of working on reducing waste, they are removing green space to build car parking, the cruise ships will keep coming, and they want to build more hotels. We are mobilizing as parents too when it comes to the issue of environmental pollution, because our children are the first to suffer its consequences. We say ‘no’ to all of this”. Enrico Capplletti, candidate for president of Veneto for the M5S, commented: “For twenty years we have fought against the incinerators, against pollution. Twenty years ago it was the same people running the Region who are there now. We can no longer accept these things – we have to make sure the city invests in a sustainable economy”.

“The human chain at San Basilio to Punta della Dogana – wrote Opzione Zero – is meant to reaffirm once again that the only possible and necessary future for Venice, for the metropolitan and regional territory, is one which looks to ecological reconversion, dignified work, social justice and relationships of solidarity. MoSE, cruise ships, the incinerator, Pedemontana, and fossil fuels represent in our area a predatory system which is aimed at the unscrupulous consolidation of a political, economic and financial power bloc”. The president of the Municipality of Marghera, Gianfranco Bettin has repeatedly aligned against the incinerator. The president of the Municipality of Venezia, Giovanni Andrea Martini, has spoken out against the cruise ships. 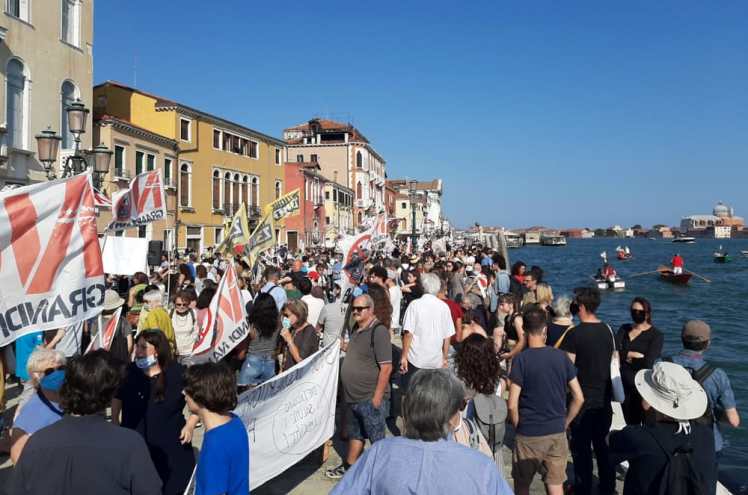 One thought on “A mega-banner against cruise ships, tourism monoculture and pollution”