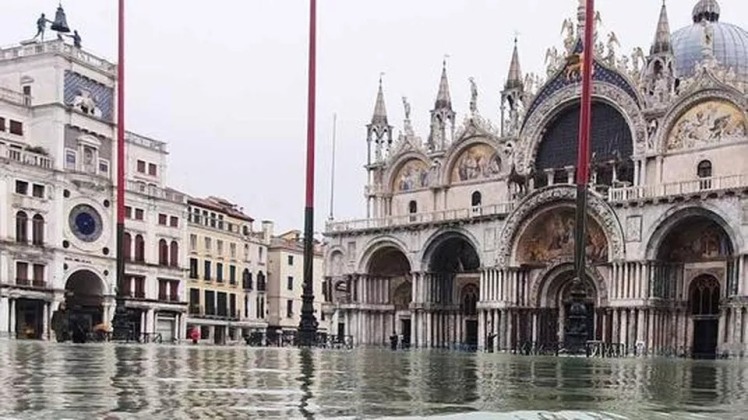 The project is now awaiting the go ahead from the Cultural Heritage Committee. But there is an alternative plan to isolate the entire plaza from the tides.

VENICE. A project to protect the Basilica is on the Minister of Cultural Heritage’s desk. The Superintendent has given a favorable opinion to the Procuratoria di San Marco’s proposal to install a system to defend the Marciana Basilica with glass plates that are one meter 20 cm in height, positioned in front of the entry, towards the Piazza. It is a go-ahead with reservations, because Superintendent Emanuela Carpani felt it was necessary to send the proposal to the minister, for examination by the Committee for that sector. The designers are confident. Procurators Pierpaolo Campostrini and Mario Piana say they are certain they can complete the project by next autumn.

The work is “simple” enough. The project involves inserting glass plates one meter and 20 high in the masegni of the churchyard pavement of San Marco. This will isolate the Basilica – which today goes underwater at 80 cm – from tides up to two meters. Behind the Basilica, towards Rio della Canonica, the water would be stopped by valves and hydraulic pumps. The cost of the project is not excessive, around 3 and a half million Euro. Environmentalists and other technicians still have doubts about the appropriateness of erecting a “wall”, even if transparent” around the most famous monument in the world.

This seems to be the chosen path, to be done quickly and avoid situations like that of last November. The exceptional acqua alta – 187cm sea level – and then a month of high tides. San Marco remained soaking wet for many consecutive days, for a total of 250 hours in one month, which has caused serious damage. “Even where it can’t be seen”, the proto of San Marco, architect Mario Piana, former director of the Venice Superintendence, denounced at the time; “not only on the floors but also in the marble and the walls”. Eliminating this salinity will take decades. In some cases the damage is irreversible, and has been valued by the Basilica’s technicians as at least 4 million Euro, as well as 841 thousand Euro in wind damage from the same days.

While waiting for MoSE – which is supposed to be finished on December 31, 2021, but has yet to resolve many of its problems, both financial and technical – the system proposed is to “isolate” the Basilica behind transparent barriers. Now it will have to be the Minstry of Cultural Heritage to decide. If the positive opinion formally arrives, the project can begin this spring, to be finished by November 2020.

However, there is also another project on the table, presented several weeks ago in the great hall of the Bilioteca Marciana, and now also being examined by the Ministry of Infrastructure. This project involves the isolation of the entire Piazza San Marco. In the case there would not be any wall of glass, but only four large valves at the edges of the marciana area, at Molo, Rio della Canonical, Bacino Orseolo and the corner of the Palazzo Ducale and the Ponte della Paglia. There would be a provisional pump installed in front of Ca’ Giustinian to collect rain water. This will keep the Piazza dry for a cost of 30 million Euro.