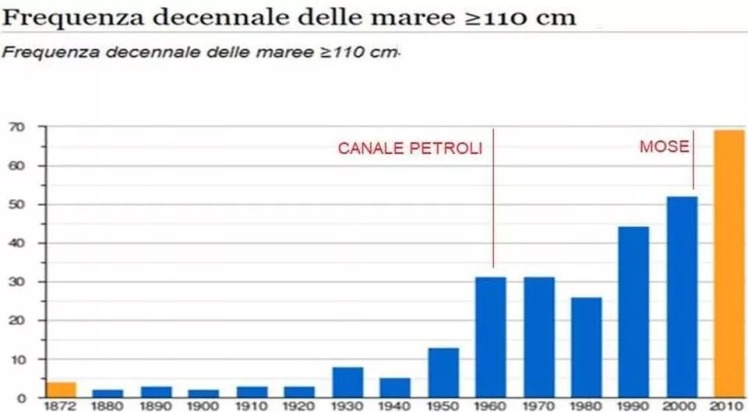 Engineers Vielmo and Di Tella’s analysis: “The graphs from the Tide Bureau demonstrate it – the turning point is the middle of the 2000s”

VENEZIA. While it waits to be ready to defend Venice, MoSE has already produced an effect. It has increased the number and intensity of the acque alte. The problems are not only climate change and exceptional weather. The excavations that have been carried out in the Lagoon in recent years have also contributed to the rise in the number of exceptional acque alte.

This is the analysis elaborated by engineers Vincenzo Di Tella and Paolo Vielmo, which they presented at the College of Engineering in Padova. Now it will be discussed for the first time at the Ateneo Veneto, during a debate about the MoSE system organized for 8 February.

The data are from the City’s Tide Bureau. The statistics for each decade, recorded since the last century, have now been “lined up”. “The acque alte exploded in the 1960s, after the excavation of the Canale dei Petroli”, argue the engineers, “then once again in the middle of the 2000s, with the excavation of the canals for the MoSE project. The graph seems to prove them correct. The annual average number of tides higher than 110 cm undergoes a first surge in the decade 1961 – 1970, more than doubling the events up to then reported at 10 – 12 per year. In the following decades the acque alte increase, but but the frequency grows gradually. The other “blow” arrives in the decade 2001 – 2010, when the acque alte over 110 reach 52 times a year, and in the last period when there are more than 70. There were only 26 during 2019, the annus horribilis of acqua alta higher than any since that of 4 November 1966.

“This is important information, certified by the data of the Tide Bureau”, comments Stefano Boato, environmentalist professor, “we have always said that excavation of the canals has contributed to the wrecking of the lagoon, and also the increase in the acque alte”.

So, while there is talk of MoSE and getting it working quickly, this reignites the debate over interventions that could reduce by a good bit the frequency – and therefore the inconveniences – of the increasingly numerous medium high tides. Ten years ago the City commissioned a study on what was then necessary to reduce the tides. CNR researcher Georg Umgiesser identified a benefit of 20 cm in sea level if for example the fishing valleys had been opened and sea defense measures had been implemented. But nothing has been done, not even the local measures to defend habitats, left in the middle.

“To the contrary, we continue down a dangerous road”, says Boato, “if we keep the big ships in the lagoon they will need to excavate more canals and basins”.

And the Lagoon is increasingly at risk. Every year almost a million cubic meters of sediment go out to sea, carried away by erosion and the traffic of big ships and tourist boats. Thus the defenses are weakened, and the water enters the Lagoon with greater force and speed. “These are problems that are talked about too little”, accuse the environmentalists, “now we only talk about MoSE”.

The last meeting about MoSE was in the Prefettura, Tuesday morning, at which the new “timeframe for emergencies” was presented, which will now be operational by February. They will try and have MoSE functional – at least in cases of emergency – by the summer. But meanwhile in the Lagoon we see only the negative effectives of the great MoSE; the cement structures and the increase in the velocity of currents and of erosion. Now, according to the engineers, we can include the increase in acque alte as well.