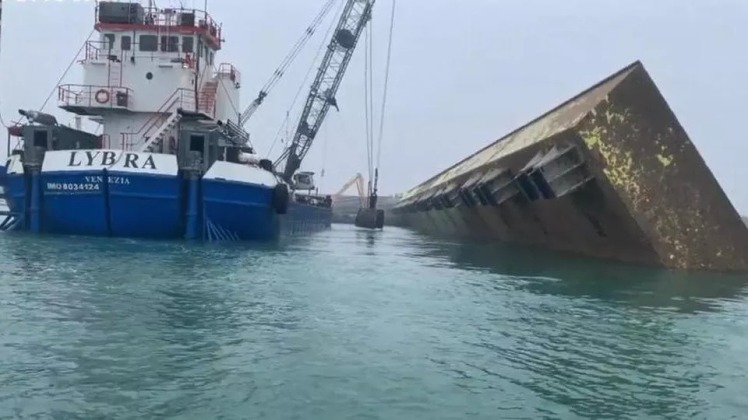 Poor or corroding materials; bricks are being considered. Salt water is always at the heart of the serious problems: an urgent meeting between the Consorzio, Provveditorato and Soprointendenza.

VENEZIA. The reinforced concrete cannot stand up to salt water. This is the most recent discovery by MoSE technicians, which throws new doubts on the grand project that now everyone wants to finish quickly. But there are still many unresolved problems.

The most recent issue is that of materials. At the barrier of Treporti-bocca di Lido, the first area where the dams were installed on the lagoon floor in long ago 2013, the signs of time are already quite visible. The concrete of the docks and the construction on the banks shows cracks and fissures. The internal steel is now at the surface. “Materials exposed to salt water have a sort life,” confirms a technician, “and most of all need continuous maintenance”.

An urgent meeting between the Consorzio, Provveditorato and Soprointendenza, and in the end, a new orientation. The walls and the dams, the docks and the banks of MoSE should be made from materials other than cement, maybe bricks, which have shown themselves as resistant since the time of the Romans. Perhaps to be reinforced with the latest generation of materials. But cement and steel no. The “galvanized iron” is also showing signs of deterioration. “The galvanization”, observes an expert, “was not of the best quality, and rust is beginning to show”.

Along with the hinges, these are an essential element for the functioning of the MoSE system. They are supposed to prevent water from entering when air is pumped internally to raise the dams, and vice-versa. But during the last inspection performed by technicians from Consorzio Venezia Nuova and Comar several months ago, it was discovered that the valves don’t work. They jam, and the functioning of the system is compromised. At times just a manual intervention can unblock them. Their replacement has been scheduled. In all there are 156, two for each gate of the four MoSE barriers.

This is another sore point in the MoSE system. After the reports entrusted to major experts it has been established that the hinges, a vital point for raising the gates – which are attached by the two hinges to the cement caissons on the lagoon floor – show widespread corrosion. This is due to the conditions in which they were left underwater, without the complete installation and perfect insulation, inviting mold and other infiltrations. But most of all it is due to the materials employed, which are not those called for in the design. Low quality steel, whose durability is half of that planned for.

The work of maintaining the gates that are underwater begun some months ago continues, in particular on the barrier at Lido-Treporti. Three of these have been submerged in sand for at least two years. The other is encrusted and already affected by fouling. The need for maintenance is infinite, at a cost of at least 100 million Euro each year.

[Ed. Note: what follows is from another story by the same journalist and paper from two days later, 28 Dec.]

“The MoSE barriers could not be raised, not on the 12th of November nor any other night. MoSE is not complete or tested. We are accelerating, but the installations are not yet functional. Neither are the compressors or the safety installations. What could happen if the power failed? We have to remember that there are dozens of people working below.”

“On the night of 12 November there were not even the minimum safety conditions. Not only was the acqua alta underway but also a turbulence not seen before, with winds of over 100 km per hour, continually and unpredictably changing. The system has never been calibrated in adverse sea conditions. The tests will begin in mid-2020 and will conclude at the end of 2021.”

“The installations are not yet completed so many things have to be done ‘manually’, depending on the work of the operators. Conducting a test under real conditions would require assembling a great machinery with rafts and pontoons at each port opening, emergency generators, rescue teams, engineers, technicians and firemen; and also experts who can ascertain what’s happening at those moments in the lagoon.”