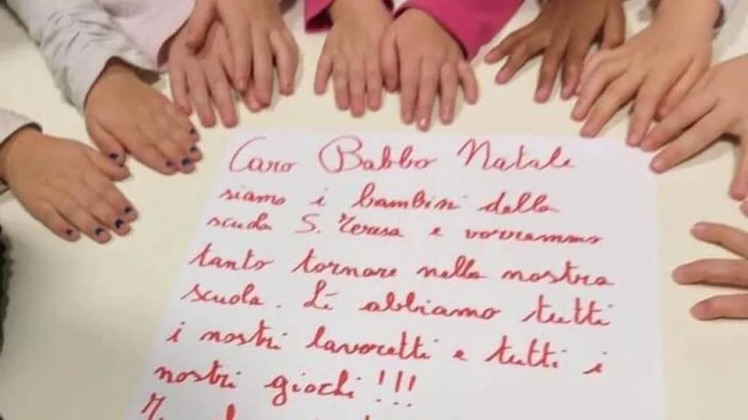 Restoration work is anticipated, the students will go to Diego Valeri until June. “All our toys and projects are still in the school”

[Ed. Note: the children’s letter reads “Dear Babbo Natale, we are the children of the S. Teresa school and we really want to go back to our school. That’s where all our projects an all our toys are!!!”}

VENEZIA. The request to return to their school, written in a letter to Babbo Natale by the 31 children from the Santa Teresa nursery school, will remain unheard. The school has been closed since the week of the record acqua alta in mid-November.

Upon returning from vacation the children will continue to be hosted by the XXV Aprile school at Sacca Filsola, and will then be moved to the Diego Valeri, where work has already begun to provide 125 sq. meters of space for the children.

The refectories are to be moved to the old kitchens, while in their place classrooms will be set up for the two classes from the now closed school.

Meanwhile the tug of war between the parents and the Administration continues, with the first having sent an injunction to the Mayor and councilors, pointing out the absence of a formal confirmation of the school’s unusable state.

Councilor Romor responds, attributing the decision to the damage provoked by the exceptional acqua alta, which has left some spaces set up for scholastic activity unusable. He adds that they are estimating special maintenance on the roofs, planned for summer 2020, for an already budgeted cost of 250 thousand euro.

Everything will wait for some months, then. With the (tacit) promise of a return to the school in September of next year, but the parents and children don’t believe it. Of the 31 children from Santa Teresa, ten have not attended school since the day of the acqua alta, given their temporary placement too far from home.

After the Christmas break, lessons will start again at the XXV Aprile, with the definitive move to Diego Valeri set to happen before the end of January. The learning materials, however, remain in Santa Teresa, along with the children’s belongings and everything else that was in the building before 12 November.

Now the 31 children have lessons in one room of 20 sq. meters, which for over a month has held both sections without any distinction between the two. Meanwhile, Friday afternoon the little students were together for the end of the year party: hosted by the neighboring patronato di San Nicolò dei Mendicoli, now that their school is gone.

In short, the primary school parents are on a war footing to pin down the City Administration and block any idea – up to now not confirmed – that the nursery school’s space is destined for other purposes.