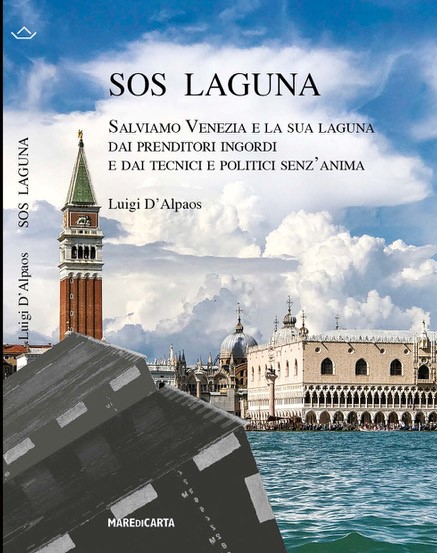 [Ed. Note: What follows is a translation of the Introduction from the new book by expert hydraulic engineer Prof. Luigi D’Alpaos about the main problems facing the lagoon – MoSE, grandi navi, and waves. As I write Venice faces a record aqua alta of 190cm. The causes are not only sea level rise, but the devastating effect of modern man’s works in the lagoon, as outlined here.]

The Lagoon, between distracted Institutions and the desires of men

Venice, its lagoon and the problems they face are always at the center of heated controversy and powerful contradictions.

Institutions lack a comprehensive vision of the problems in the lagoon, and they seem to continue to concern themselves most of all with the needs of stakeholders who are capable of attracting the support of a political world that, lacking any knowledge, confidently sides with supporting the solutions they propose, following one and then another of the protagonists in Venetian affairs.

The vital questions concerning safeguarding of the lagoon, an environment that is unique for its type, and irreplaceable, are almost never given the centrality they deserve, and that they once had during the government of the Republic. In those times the men who chose to live in the lagoon, in contrast with the men of our times, confronted the problems at hand with pragmatism and greater wisdom, making prudent choices, recognizing the failures of their own provisions and always trying to find a remedy.

In these pages we will look closely at some of the more recent events to which modern man has subjected the lagoon, beginning with the sudden decision in 2006 to begin work at the mouths of the port to control high waters, based on a project that was strongly criticized and deficient in important ways that are now emerging. It is a project that is now showing its flaws, which were pointed out – in vain – at the time it was beginning, and that in all probability, if it ever becomes functional, will be destined to fail within a short time with respect to its initial goals. Underestimated by the designer, the fatal consequences of the predicted rise in sea level over the course of the century, and the costs of operation and maintenance, which are still unknown in any detail but which are very probably unsustainable, run the risk of becoming the tomb of this Pharaonic work with feet of clay.

Following this are some considerations regarding the idea, advocated by a certain part of the Venetian world, of excavating a new, navigable canal, or of totally recalibrating existing canals in order to keep the cruise ships in the lagoon, maintaining the internal dock at Marittima or creating a new one at Marghera. All this ignores the effects of the predicted change in sea level on the cruise ships and the devastating consequences on the morphology and lagoon floors that would result from this initiative. This has already been demonstrated by the hydraulic disgrace that is the Canale dei Petroli, which was inflicted on the lagoon fifty years ago, by designers who were poorly prepared and whose results were never checked or monitored, neither by the Institutions charged with oversight and even less so by the greedy users.

I will conclude with some reflections on the worrisome consequences of waves for both the lagoon’s formations and for the urban fabric, waves caused by the wind as well as the perhaps even more damaging waves resulting from the out of control navigation practiced by many in the lagoon, in vessels of every type, without any limits or controls.

The phenomenon is complex and is influenced by many factors, but in the case of water vessel traffic in the lagoon it has been theoretically and practically demonstrated that the intensity of wave energy depends above all on the how fast the boats are going. While we wait for future measures, it seems obvious to point out that there already is one that could be immediately applied: reduce the speed limits to those indicated in the many tests that have been done and, if possible, to below navigating speed, while in parallel partially limiting the power of engines that are in use, which are often larger than necessary. Because the energy transmitted by the boats to the wave systems they generate greatly depends on water displacement at traveling speed, the benefits of placing limits on speed would be consistent and would immediately help reduce a deterioration of the lagoon structures that has now become uncontrollable.

Although it is banal, a provision such as this would require the political will to proceed, first and foremost establishing severe and systematic controls on speed limits in all canals and on the open waters of the Lagoon, with appropriate fines for those who do not respect the limits. When it comes to the issue of waves it is no longer time for idle talk, and even less so is it time for a Commissario ad acta, as some are talking about. It is time instead for action alone.

The cultural obscurantism of the past thirty years does no good for Venice and its lagoon. Neither does the greed of the borrowers who have dominated this period, gorging on public money. Even less useful is the “discretion” that still seems to be applied, always excluding critical observations made by others from being heard, even when they come from people who have demonstrated that their understanding and competence is of a much higher level than that of those who claim decision making powers.

Venice, its lagoon and its Institutions decidedly require a change of course from the past. Most of all they require bringing in new people who are capable and prepared, and who are finally identified not for the friendships they have cultivated or for the services they have provided to some powerful office-holder, but for their earned technical and scientific merits and for their recognized authority. More than ever it is urgent for us to change the current course, in which new and high-impact projects are being proposed for imposition on the lagoon, never thinking of the necessity of its safeguarding, but looking only at taking care of special interests, whose goals do not always coincide with the common good.

One thought on “SOS Laguna, by Luigi D’Alpaos – Introduction”