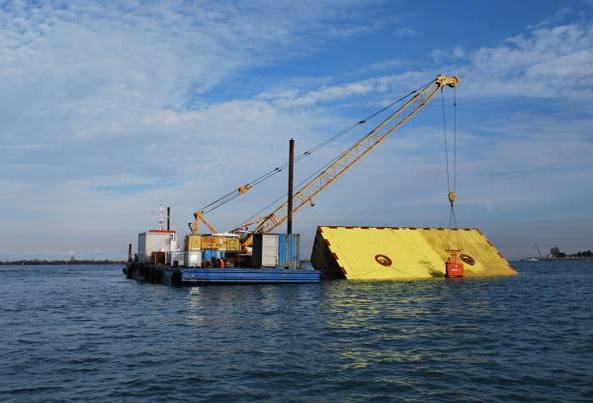 Debts and litigation – a “hole” of 5 million Euro, and even the ex-Coveco is asking for a settlement

VENEZIA. ANCE raised the alarm no more than a month ago: “There are 15 business that have advanced over 63 million Euro for work on MoSE – declared Ugo Cavallin and Giovanni Salmistrari, respectively in charge of the association of builders in Venice and the Veneto – thousands of workers are at risk”. This charge refers mostly to medium to small businesses, those who receive work as subcontractors to the large entities of the Consorzio Venezia Nuova, the group which is building the system of dams that will defend the city from exceptional high waters, and it has brought the commissioners, just in the last few weeks, to give these businesses priority for payments. But the crisis in this sector is not sparing even the ‘colossi’ of MoSE – from Mantovani to Condotte and Grandi Lavori Fincosit – while the latest news is that Kostruttiva has also requested debt restructuring. Kostruttiva is the consortium of Veneto cooperatives that was once called Coveco, and which changed its name after the scandal and arrests in the great dragnet of 4 June 2014, which involved ex-president Franco Morbiolo (who ended up with a plea bargain of one year and four months), while ex-consultant Pio Savioli, who was on the Board of Directors of CVN, was one of the principals among the accused to plead guilty and is now is facing trial for corruption.

However, this is not only a question of MoSE. Kostruttiva, now run by Devis Rizzo, has in fact had to in recent months endure a pair of crises that would be enough to take down anyone. On one side there is the crisis at Condotte; this has forced the business run by Duccio Astaldi – who in the meantime has been arrested on accusations of bribes concerning other building sites in Sicily – to request a debt restructuring agreement, and has harmed the consortium of Veneto coops. Kostruttiva is in fact partners with Condotte in the construction work at the entrance of the port of Chioggia: the two companies formed an ATI (Temporary Business Association) which receives payments from the Consorzio Venezia Nuova and which then subcontracted the work to a coop called Clodia Scarl, with which they are partners, even though most of the work is done by the coop. The rules stipulate that in an ATI the payments are received by the lead group, which then distributes the money to the other businesses and suppliers: but now that Condotte is in debt restructuring, obviously all payments have been blocked, and Kostruttiva finds itself in a “hole” of around 5 million Euro. Since often when it rains it pours, a second blow came for the consortium with the bankruptcy of Cotau, the coop that was performing work on the metropolitan surface rail system in Mestre. In the past few days, as predicted, the Veneto Region, which commissioned the work, has accordingly revoked the contract, but moreover it withdrew the 1.5 million Euro guarantee payment, while the contractors who have not been paid by Cotau are demanding cash. Faced with this great financial pressure, the heads of Kostruttiva have decided to “freeze” the situation with a request for a continuing agreement to restructure debt, presented last 17 March. The tribunal has already nominated president of the Ordine dei Commercialisti Veneziani, Massimo Da Re to oversee the agreement process.

Other than the debt restructuring at Condotte (which has debt exposure of 461 million Euro), in recent days Milano Finanza has revealed that Grandi Lavori Fincosit – about which rumors have swirled for weeks about possible debt restructuring – has in fact initiated serious negotiations towards restructuring its debts with the banks. In this case as well the numbers are quite high: the industry daily reports a debt that at the end of 2016 had already surpassed 250 million Euro against a balance sheet of almost 450 million. What’s more, public contracts are decreasing, and the institutions do not pay, or if they do, they pay late. If we add to this the crisis at Mantovani, which has had to turn to the mediation of the prefect of Venice in order to reach an agreement on new projects (among which is almost 22 million Euro for Arsenale) with the CVN commissioners Giuseppe Fiengo and Franceso Ossola and administrator Roberto Linetti (and in doing so saved about thirty jobs), it seems clear that at present not one of the big businesses of the Consortium is in good financial health. The date for completion of the work, which has just passed the 15th anniversary of the Comitatone of 3 April 2003 which gave the definitive approval to MoSE, remains an unknown, even if the timetable still refers to the optimistic date of 31 December 2018 for delivery.

One thought on “Debts and litigation for the giants building MoSE”