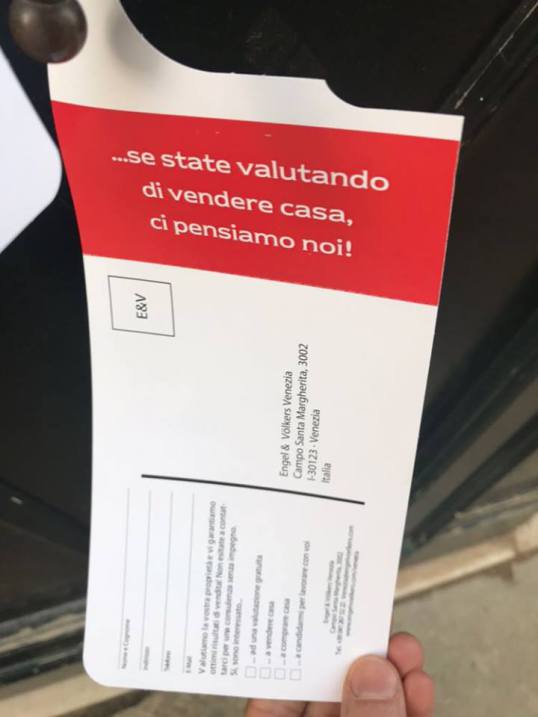 “…if you’re considering selling your home, we’ll consider it!”

Venetians across the city found the front of their homes, doorknobs, etc. festooned with these cards from the Real Estate company Engel and Volkers Venezia. On the front the cards have a nice Christmas scene. Happy Holidays and buone feste, we want your home for someone who will pay more for it.

The cards naturally have provoked an uproar among the citizens, who reject this new low in predatory marketing for the second home market. Once again in response Gruppo25Aprile has voiced the sentiments of many. Their letter follows.

Beyond the local laws which you may well have broken in placing these flyers on our homes, are you aware of the reaction of rejection you provoked today with this hostile campaign aimed at occupying the market for second homes – because this is we are talking about, this is your “target” and it has been noticed – in a city which continues to lose 3 residents a day? This is a city at its end, under assault, which cannot stand the hypocrisy of a fake Christmas card which actually contains that which we published in the picture.

In a city where evictions due to terminated leases are ever more frequent, affecting blameless families whose only crime is that of being an obstacle to the juggernaut of second homes and tourist lodgings, yours is a rude gesture, especially on the eve of Christmas.

We are fighting with our bare hands and we are well aware of it. In the spirit of Christmas which unites us, before relying on printed flyers, we appeal to your common sense: even multinationals have a soul, right?

If so, demonstrate it to us by putting this invasive and tasteless campaign to an end. The residents will appreciate your action.

On behalf of the residents

One thought on “Venice invaded by fake Christmas door hangings: flyers are actually an invitation to sell your home to a foreign company.”