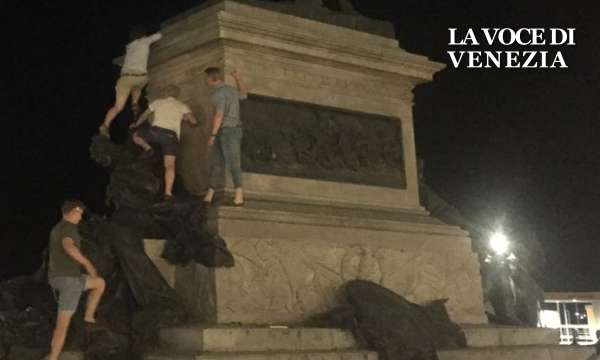 Who knows what passes through people’s heads when they arrive in Venice. Would it be a sense of impunity? Or a misguided perception that “everything goes”?

Somewhere there is a reason, or an impulse, if “normal” people in everyday life feel as though they are stars in a circus as soon as they arrive in the city.

Would it be that in the collective imagination the “guards” of Venice are soft figures who, when they see an infraction, turn elsewhere?

But it is not so, and we must change this mistaken perception because the deterrent effect of the fear of fines is lessening. And this fear is even less of a factor when the manners of the parents don’t even reign in insane acts.

Because, we’ll tell the truth: when we went on vacation with the family obedience to our parents was the primary barrier to stop bad behavior. Mother’s pursed lips or the cold eyes of Father would more than calm any future trouble.

Now, instead, video with the smartphone. The times have changed. Yes, but it is also the people who have changed if today the sons climb on our monuments in order to conquer the top and violate its height, and the parents, seated comfortably in the seating in front of the hotel, applaud the first who made It, while teasing the others who had not yet done it.

This happened Wednesday evening, between 8:30 and 9:00. Two families comfortably seated outdoors in the seating in front of the large nearby hotel, following with interest the challenge amongst the youth who had begun climbing the national monument to Vittorio Emmanuel II.

First they attacked the south side, but the ridge was not passable, perhaps because of weather conditions. They therefore attacked the east side of the menacing mountain and the project succeeded.

The video shows that at the end, in fact, the most capable did succeed and received much applause and the encouragement of the parental manager of his team, who followed the challenge seated with a drink in hand.

Is this what it means to be a “guest” in Venice? Encourage the children to climb to a height that could easily be the first floor of a house?

People, let’s be honest: here we clean the backside with flyers. Whether they be the official “#respect Venice” of the Administration, or whether they be those attached to the walls of Castello with scotch tape, “Tourists, respect the residents”.

The “advisories” have an effect only on decent people, who have this kind of sensibility. But these are not the people who walk the streets with their butts out or who climb our monuments or dive off the bridges. The “target” of the message is mistaken.

Hicks, boors, rude people: we have defined them in a thousand ways in a Rossinian crescendo of insolence. Now is the moment to educate them, getting them to understand that for every action there is a reaction, without such inconveniencing  behavior.

Therefore, those citizens who favor heavy fines are correct. It is true that because of this we may become unpopular, because then the TG will throw away the limits to a case right away, but this is exactly the effect that we should wish for: the message of a Venice in which no longer will everything be tolerated passively, disseminated widely.

And we need to do it soon, before these or other new undertakings posted on social video create new emulators for ever greater challenges.