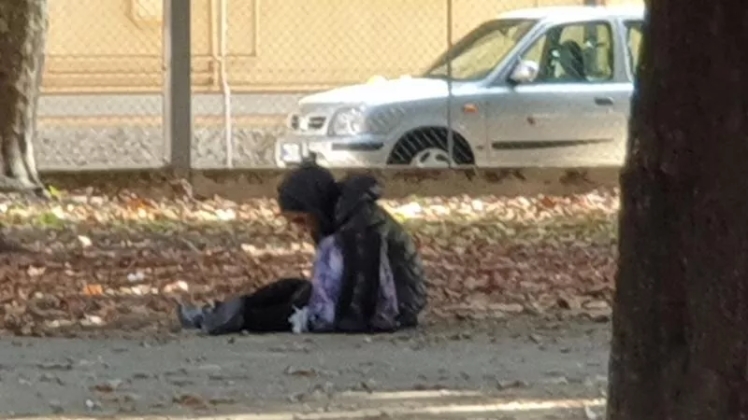 A journey among users, dealers, residents and merchants on via Piave. “This place has decayed, and you can find everything”. Life after the most recent fight between pushers. “The one stabbed is a small-time boss – there are two rival groups, and anything can happen”

MESTRE. “I want to take these drugs, stop harassing me”. It’s 1:30 PM and the two friends have just bought a dose of heroin at the corner of via Felisati, from one of the dealers of the three Nigerians who take turns at the corner with via Piave.

For the sale – the dose that slides into the kids’ hands, the 20 euro bill passed to the dealer – there is no need to find a hidden corner: the transaction takes place on the street, this is normal. But to consume the heroin it is better to look for a place that is more sheltered.

To the right and then to the left, the two friends make their way into a driveway, then they go back to where there is a kind of doorway. Via Felisati, via Salettuol, via Col Moschin. A labyrinth of streets and passages which, even though they came from Belluno – “I’m from near Cortina”, says the girl – is an area the two know well.

She sits on the steps at the entry of the doorway an office that seems abandoned and starts unrolling the tinfoil. He gets angry, not wanting to do it in front of other people.

It is at this point that the girl, with a bruised face and green, liquid eyes, raises her voice and says that she wants to take drugs, not to stop and talk. And she leaves.

He follows her a moment later, saying as he goes: “What is there to understand so much? This is the most degraded place on earth: heroin, cocaine, you can find everything but most of all you find good stuff at good prices. That’s why there are a lot of people who come from out of town. You would do a line every once in a while, no? I do them all”.

Money from the Food Shop

The intersection of via Felisati and via Piave is one of the many drug dealing spots, but perhaps the best known. At the corner are stationed two or three dealers, moving on foot and with scooters. They keep the drugs in secret hiding places only for those who they do not want to see, for example under the grate of the flower bed.

When the clients arrive, many very young, they move only a few meters. The dealers put the money they are paid in their pockets. “Then, when they have collected a bit, they bring it in the food shop. So, if the police stop them, they cannot even seize the money”, relates a merchant on the street.

Dealers on the Swings

Places for dealing and consumption: via Felisati, but also the gardens of Piazzale Bainsizza, or the pedestrian/cycling underpass that, passing under the station, connects Mestre with Marghera.

At the gardens of Piazzale Bainsizza the dealers are sitting on the swings, a girl is sitting on the ground injecting, and another, dressed as a room hostess, arrives to purchase a dose.

Among those who live and work on via Piave there is a desire to talk, not to just live with it. And the reason is understandable. “What we have outside our door, would you feel safe? In the last few years the situation has worsened, they sell heroin everywhere, if you pass behind the Church of Santa Maria di Lourdes you find kids with syringes in their arms”, relate Andrea and Lorenzo, “and someone should take care of them too”.

And then there are the addicts with suitcase, those who are economically better off. “You see them immediately”, they say at the pharmacy on via Piave, “they come in, buy syringes and the physiological solution for the injections and then disappear into a hotel room for the weekend. The city notices them when someone doesn’t come back out of the room because they are dying of an overdose”. This year there have been a pair of cases.

“Help, they stabbed me”

At Mattia Voltolina’s Farmacia all’Europa they have the faces of those who have seen it all. Most recently on Wednesday afternoon. Two men came in the pharmacy: one was pressing a cloth against the back of the other, who told the pharmacists: “Help, they stabbed me”.

The story continues: “We accompanied him outside, waiting for the arrival of the ambulance and the police.” The youth who was stabbed is somewhat known by everyone here. In the neighborhood they call him ‘piccoletto’ because of his height. “He’s one of the bosses in the area: and now anything can happen, because they will fight again”.

“There are two groups of Nigerians active in drug dealing that have been fighting since March, and the incident on Wednesday was only the most recent in a series of episodes”, one of their co-nationals said, who wants to distance himself, and offered his version of the story.

“The other evening there was a small group of three dealers, and they clashed with another group of about 5-6 people. More than one knife came out. There were two serious injuries, but there were also others that did not seek treatment”.

“Even we can’t take it anymore because they are ruining the street and people are beginning to be afraid. But if the police would arrest the 6-7 main people we could have some peace for at least a year, in this neighborhood that has no peace”.