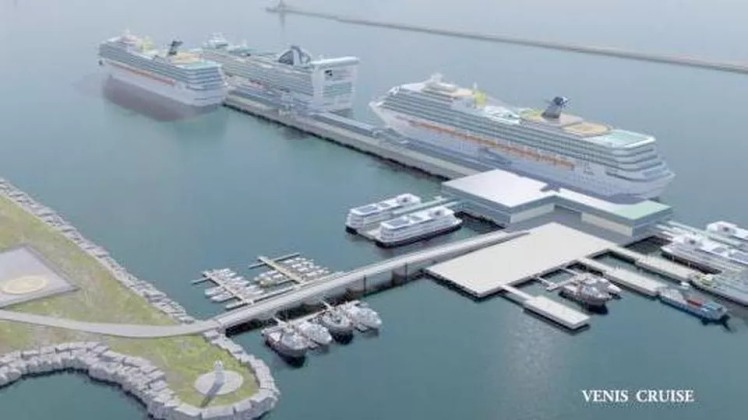 Judges overturn the negative opinion expressed by MIBACT and “make it obligatory” that MIT transmit the project to CIPESS.

VENICE. “It’s a moral victory. A great recognition of the quality of our work after ten years”. Cesare De Piccoli, former vice-Mayor and former vice-minister for the PD is almost moved. De Piccoli is the creator of the alternative project for cruise ships at Venice.

The first section of the Veneto TAR (Regional Superior Court), presided over by Maddalena Filippi (with Nicola Bardino and Filippo Dellera) heard the appeal presented last summer, and overturned the acts of the Ministry of Cultural Heritage, which belatedly expressed a contrary opinion.

The international call for bids to identify an alternative solution outside the lagoon for docking the cruise ships therefore must be redone.

It is a historic ruling, which overturns what has been written to date about the Venice Cruise 2.0 project, that is, the new port at San Nicolò, in front of the artificial island for MoSE. Docks for 3-4 cruise ships and two-story buildings (originally there were 3) which in this way will not have to enter the lagoon. The ruling recognizes that the waters affected by the project are not within the boundaries of the lagoon.

Therefore the site for the new docks is “outside” the lagoon, and it can also be taken into consideration as a temporary solution. The judges scolded the decision makers for deciding on the Marghera solution without accounting for the negative opinions of the Environmental Impact Assessment and of the Port Authority itself, which had defined Marghera as a dangerous solution.

But above all the appeal of the competition launched by the special commissioner Lino Di Blasio and the government has canceled all the contested acts.

The De Piccoli project, developed by Genoa-based Duferco and by DP Consulting, has been in line for ten years. It was presented just a few days after the shipwreck of the Costa Concordia at Giglio and the Clini-Passera Decree.

However, it was never taken into consideration by the Port Authority; not during the time of Paolo Costa, who instead proposed excavating the Contorta canal, which was then rejected, and it was not considered by Pino Musolino, nor by Di Blasio.

Now the administrative judges have defined this failure to complete the project’s authorization procedure as “illegitimate”. The project has remained in a drawer at the Ministry for many years. Now the Ministry of Transportation is “obliged” to transmit it to CIPESS for evaluation, conclusion of the examination and financing.

The idea of staging the cruise ship terminal outside the inlet at Lido was first presented in 2006, during the days of debate over alternatives to MoSE. It was then refined and officially presented to the Ministry. It garnered the support of anti-cruise ship groups and many experts, but never received a positive opinion from the Port Authority and the Ministry.

With the ships at Punta Sabbioni Venice would maintain its function as a home port. Goods and passengers would be transported to the ships aboard ecologically sustainable motorboats after going through customs in Marittima.

With the TAR’s historic ruling, the debate over the new cruise ship terminal for Venice has now reopened.