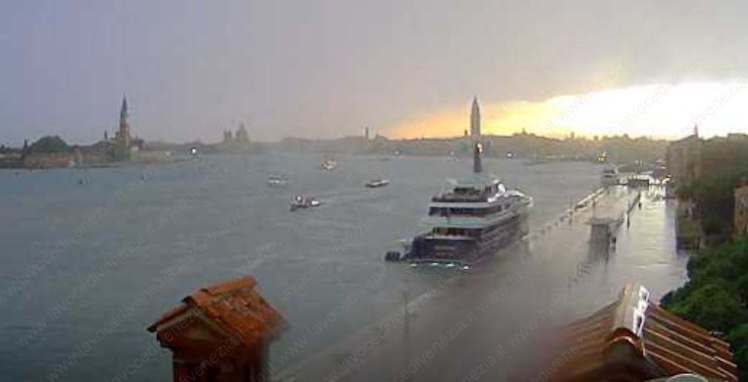 “If you are expecting culture and tradition you will find the exact opposite – in fact you’ll feel insulted. But what is worse is that the places where you will sleep, eat and shop have behind them sad stories of families that, in the name of “tourism”, have been exiled from the place where they were born and raised.“

[Ed. Note: what follows is an anonymous letter to the editor that recently appeared in La Voce di Venezia.]

Dear tourist, if you are planning a day trip or a stay in Venice, stop and think before you make a reservation. What you imagine to be the “most beautiful city in the world” is no longer even a city, but rather a place in the hands of speculators who have absolutely nothing to do with “original”. Remember: when you hand your money to the landlord, the restaurant or the souvenir shop you will be financing those who have evicted the residents, replacing them with temporary workers who don’t earn enough to live there.

Those of you who speak of tourism as the “gold of the third millennium”, take a look at the trainees at the reception desk, or the army of foreign waiters and cooks forced to share accommodations on the mainland. Because what the administration calls the “world capital of sustainability” does not provide for inhabitants: buildings that once housed families have become hotels and “short-term rentals” where the only ability required of the employees to that of “knowing how to adapt”.

A look at the numbers tells the story: if in 1951 Venice had 174,800 residents, today it counts just 50,412, mostly older. The most striking number concerns the number of guest beds in the city, which has gone from 12,995 in 1997 to 59,373 in 2019: an almost five-fold increase. The same has happened with bars, which now number 1,468, of which 420 opened in the last 7 years: these “come lately” businesses only know the stereotype of Venice, and if you ask them for information you’ll be answered by someone who knows even less than you.

Because the tourist is only a number, a chicken to be plucked; so what does it matter if what you tell him is false? Rather its better that they all go to the common places, to the “mask shops”, the “gondolas” and “Casanova”, given that the lowest common denominator brings in more profit.

If you are expecting culture and tradition you will find the exact opposite – in fact you’ll feel insulted. But what is worse is that the places where you will sleep, eat and shop have behind them sad stories of families that, in the name of “tourism”, have been exiled from the place where they were born and raised.

This is because the market has never been regulated, and a minority of Venetians, property owners, have taken advantage of that. Without any scruples they have not renewed residents’ rental contracts but instead have sold to agencies, multinationals, and shady businesses.

Thus where once there was a house or a local store, now there is a “Ca’ Arleccino”, a snack bar or a souvenir shop, all rigorously fake, while the real Venetians, the bearers of the city’s culture, values, and tradition have packed their bags, and reluctantly live in some building on the mainland, talking nostalgically about their city, which no longer exists.

The only thing that gravitates around Venice is the avarice of the property owners whose only priority is profit, for whom “a hundred euros more makes the difference”, people who have no hesitation in booting a craftsman out of his shop, or an elderly couple, or a young family with children from their homes.

Their insatiable greed has triggered a vicious circle, where the lack of inhabitants leads to the closure of schools, hospitals and services, simultaneously eliminating the professions that made it possible to cope with the increasingly onerous rents and causing further loss of residents.

The appeal “don’t come to Venice” can seem strong, and according to some “counterproductive” because this would take away from tourism workers “even the little” work that allows them to feed themselves. However, it is the only solution to free the city from speculation, to help the city return to the place it deserves to be. It is only by boycotting the hotel chains, the landlord or the restaurant with a “buttadentro” that the owners will lose income and begin to question the investment: rents could drop and allow young people and families to return.

If you choose not to come to Venice, it will also be an advantage for you, visitor, if in a few years you can come back and feel like the guest of a living city, where you see the children playing, where you will sit to eat next to a resident, and when you go home you will carry these memories in your heart instead of stereotypes, crowds and junk for sale. But above all you won’t increase the bank balances of those who inherited a house or a store but, instead of rolling up his sleeves like his grandfather and father, lives a life of luxury off his income without any care for those who have been evicted, and those who, in their place, are reduced to temporary “contracts”, double rooms, washing dishes and selling trinkets that have nothing to do with “Venetian” at all.

3 thoughts on “Letter from an ex-Venetian: “Love Venice? Then don’t come to Venice.””