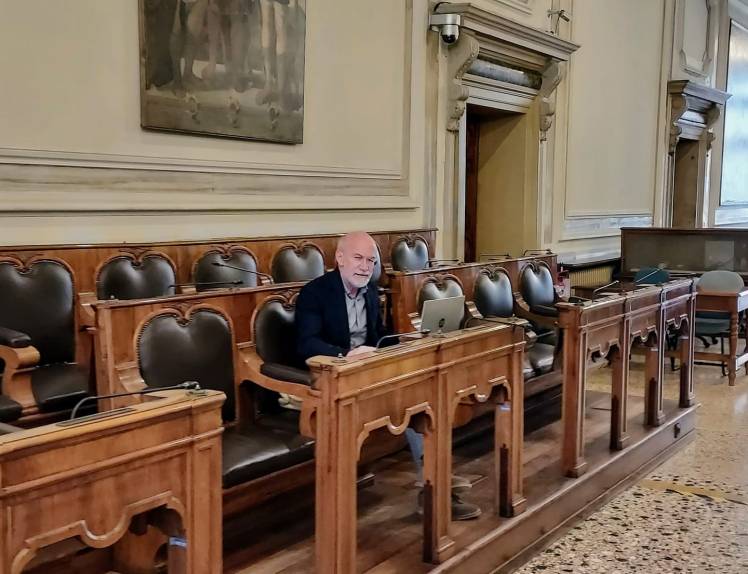 Today the City Council approved the guidelines for the “Bosco dello Sport” at Tessera. However, the economic resources remain to be allocated to the municipal budget: the vote on the budget change will be on May 5. Letter of protest sent to Ursula Von der Leyen at the EC.

VENICE.  In the empty hall of the City Council, Councilor Giovanni Andrea Martini (Tutta la Città Insieme!) read the letter that he has sent to the President of the European Commission, Ursula Von der Leyen, “so that she can understand and evaluate the very serious choice that the Municipality of Venice is making, spending public money for a stadium rather that restoring all the public housing, resolving the problems of public transportation, etc.”

Here is the text:

The opportunities that the European Union is giving to the member states through the instrument of Next Generation EU are unprecedented. However, precisely because of this the efforts made by countries, regions and cities should go to projects that truly make a difference and take steps toward the transition which we all must strive for.

Unfortunately, this does not always happen, and as an elected political representative in my city, albeit elected with a few thousand votes, I feel the obligation to inform you that the Italian State is about to approve financing for a project on the territory of Venice that has nothing at all to do with the priorities of the Green Deal.

Sadly, the many problems in Venice are well known: in addition to and beyond the environmental risks, the historic city and the islands are losing residents and productive activities at a very concerning rate, the future of Porto Marghera is still unclear, and the social decay in Mestre has now reached alarming levels.

The city Administration and the executive of the Metropolitan City of Venice are responding to these issues with a project they consider to be the priority: the construction of a new stadium and sports and road infrastructure on agricultural land close to the airport at Tessera, which is also due for a further extension. The project has been dubbed “Bosco dello Sport” [“Forest of Sport”], to highlight environmental sustainability. However, the project will actually have a heavy impact on the livability of the entire area, which is still partially agricultural. It will lead to strong imbalances in terms of traffic, the temporary attraction of large numbers of people and cementification – even if executed with what will certainly be cutting-edge building criteria. The claim is that they want to carry out a project of social inclusion through sports activities, but in reality they are building structures for sports at the professional level, which have nothing to do with the daily life of the city.

Many citizens such as myself believe that this project – which, in fact, was born years ago under previous administrations, when environmental sensibilities were not so developed, and concepts such as “Transition” and “15 Minute City” were not yet widespread – should not be financed, because there absolutely other steps that should be taken to convincingly embark on the path of transition.

Moreover, the “Bosco dello Sport” does not respond even minimally to the objectives of Mission 5 of the Italian PNRR, which concern urban regeneration and interventions on social decay, given that the plan involves a residential and agricultural area that does not have these kinds of problems. Rather, this area has other problems that are predominantly environmental in nature, linked to traffic and the proximity of the airport. Plans for urban regeneration and combating social decay should instead be developed and implemented in other parts of the city, especially in Mestre and Marghera.

While I understand that there are other priorities in this dramatic period, I ask if you can give some attention to Venice, to help stop a truly useless public expenditure. A negative opinion from the Commission to this type of planning approach would be an absolutely positive and constructive signal to those who truly believe in sustainable urban policies and carry them out seriously.

Thank you for your attention, and I send my most cordial regards,