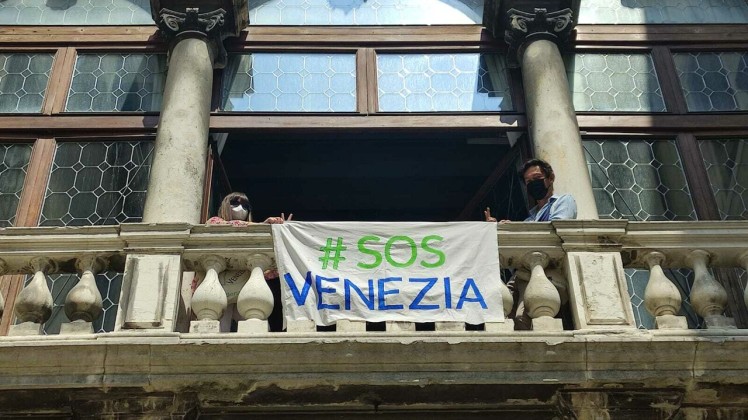 Flashmob today by activists from the group in symbolic locations of the economic and political institutions: City, Region, former Magistrate of Waters, the ex gasometri and viale San Marco. “A response to yet another postponed decision by UNESCO, which seems to focus only on cruise ships, while there are many more unresolved problems”

25 Aprile launched a flashmob today, with “SOS Venezia” written on large white sheets spread around the city. It’s an initiative by activists of the association, who have launched an appeal aimed at all the institutions upon which the future of Venice depends. There were simultaneous flashmobs at the City offices, Regional offices, UNESCO offices, at the former Magistrate of Waters, at the ex gasometri and in Mestre at viale San Marco: six symbolic locations. There are banners hung in Castello, Cannaregio, San Polo, San Marco, Dorsoduro, Santa Croce, Lido, Mestre, Burano, Giudecca and San Marco.

Banners with the slogan “SOS Venezia” made their peaceful and colorful appearance. They appeared in the place where the MTK towers are supposed to be built at San Francesco della Vigna (Castello), and at the site of the planned 70 meter skyscraper on the former Real soccer field at viale San Marco in Mestre. “They are being built by the same builder, which is a sponsor of Mayor Luigi Brugnaro’s basketball team”, explain 25 Aprile activists involved with the demonstration. “While cement and the construction of hotels and commercial centers increases on the mainland and in the lagoon, the small shops and residents diminish”, says the committee.

The opinion campaign began on 16 July, at the same time as the UNESCO session that has again announced the possibility that the lagoon of Venice could be put on the list of endangered sites, and with the G20 that is taking place at Arsenale. It will continue until 31 July, the last day of UNESCO’s summit in China.

In the meantime, however, today UNESCO has decided that there will not be an infringement procedure for Venice, recognizing, as the City Councilor for Culture Giorgia Pea explained, “the work of Mayor Brugnaro and the administration in the management of tourism and of cruise ships in the lagoon, in addition to the care of protected sites”.

“Today’s demonstration – the Gruppo 25 Aprile activists inform us – is also in response to yet another postponed decision about Venice by UNESCO, which seems to focus only on the tip of the iceberg (the cruise ships), while there are multiple unresolved problems in the city, as has been recognized by the organization itself”.

Photos of the day’s events and banners are here.