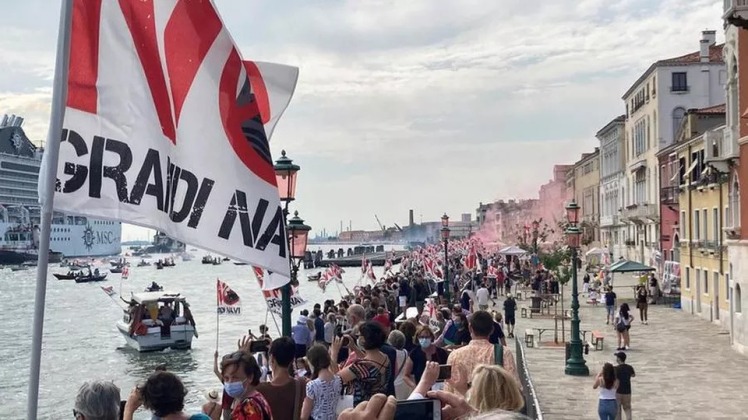 The lagoon city risks a downgrade that has no direct consequence, but which would impact the prestige and attraction for tourists. Bandarin: “It would be serious”

What would happen to Venice if it ended up in the so-called – and much feared – “black list”? Materially nothing, but the prestige and the reputation of the city would sink, and also throwing a shadow on the government, unable to have found solutions quickly for the cruise ships. On the brink of being included in the black list are also the historic center of Vienna, threatened by the construction of ultramodern skyscrapers; the port of Liverpool, invaded by a wild real estate speculation that has transformed the skyline of the city of the Beatles, and the coral reef at Canberra, where the coral are at risk of dying. Places that for their peculiarity and uniqueness UNESCO has welcomed into its own arms, but which now could end up being penalized.

The meeting planned for Beijing from mid to late July will decide the fate of the sites accused of not having done enough, like Venice.

“The black list is a mechanism for UNESCO to signal a serious problem”, explains Venetian Francesco Bandarin, former director general of UNESCO Cultural Heritage and former director of the UNESCO World Heritage Center. “This serious problem can depend on either natural factors, such as sites destroyed by earthquakes or conflicts, or when a government is not able to maintain the directions given by UNESCO”.

In the case of Venice, the serious problem would be the cruise ships, as already emerged two years ago, the first time Venice was warned by UNESCO that it was in danger of ending up in the black list. “If Venice were to end up in the black list it would be a warning sign, and the site would lose prestige”, continues Bandarin. “Nothing concrete would happen, but it would be an indication at the international level of the fact that there is a very big problem with the decisions the government must make”.

If Venice ends up in the black list it could get out by following UNESCO’s indications, which at that point would intensify the monitoring of the management of the city. The question, however, has been dragging on for some time, and does not only concern the cruise ships, but also the management of tourism.

However, when it comes to cruise ships, this time around UNESCO has not granted any more time, categorically stating that they must not go through Venice anymore. Since the Costa Concordia tragedy cruise ships have been one of the hottest topics in the city, as we saw at the most recent demonstration with port workers on one side celebrating the return of the Msc Orchestra and the environmentalists on the other side, protesting its presence in Venice.

On the occasion both Vice-Mayor Andrea Tomaello and Commissioner of Tourism Simone Venturini sided with the workers, claiming that the only solution for keeping jobs and preventing the passage of the ships in the Bacino is Marghera.

On May 12 the Camera made law the decree approved by the government at the end of March, which established that cruise ships can no longer pass through the lagoon. Rome has set up a call for ideas for an off-shore port, the announcement of which should be published June 29, indicating Marghera as a temporary solution.

However, after having spread the message around the world that the floating giants would never again be seen passing before San Marco, not even a month later, on June 5, the Msc Orchestra sailed through the canale della Giudecca.