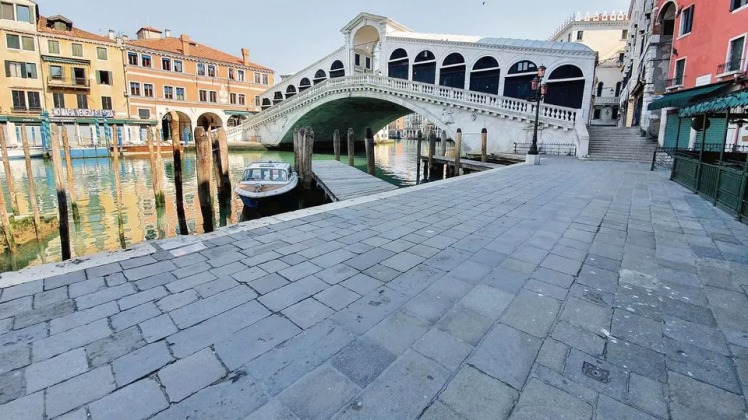 If nature has reclaimed its spaces, the mandatory loss of sociability has wiped out the rest. Not only tourists, but the stores, the pedestrians, the students. And the sounds of the city have disappeared with them.

Venice shut down with a Carnevale, just over one year ago, when, almost at its conclusion, an order signed by Regional President Luca Zaia as the coronavirus swept in, sent the 70,000 people who had descended on the lagoon for the final Sunday of the festival home in a hurry.

A year later, in the new Carnevale has become virtual only, the virus, instead, remains more real than ever.

In the middle, a city that has paradoxically rediscovered, in the desolation, the splendor of its architecture, which has stood through the lonely, cold months, almost inaccessible without the “disturbance” of human presence around them. There has also been an environmental regeneration, so that places for tourists who are no longer there have been taken over by shoals of mussels darting in the canals, which have gone back to running clear due to the absence of water traffic.

There are the families of cormorants perched on the bricole in the canals of Giudecca, which extend up to San Marco, or the mallards that are nesting undisturbed on the ACTV piers. The masters also remain – the seagulls, always dominant in the “high quarters” of Venice, with their hysterical and a bit unsettling cries, morning and evening.

However, while nature has reclaimed its spaces, the mandatory break from sociability has cancelled all the rest. Not only the tourists are gone, but the stores – many of which will not reopen due to the crisis – the pedestrians (kept at home in good part by ‘smart working’), and the students. And with them all, the sounds of the city have also disappeared.

What about the symphony of the trolley wheels being dragged by tired tourists along the narrow calle or over bridges in search of an elusive, often approximate destination? Or the Babel of languages you can hear just by listening as you walk? Or the sounds of the water?

It’s not only the lapping of the water on the broken foundations along the canals, pushed by waves from large or fast boats (moto ondoso). It’s also the guttural sound of the sirens on the cruise ships parading along the Bacino di San Marco. The constant rumble of the vaporetti motors, or the transport boats maneuvering or docked along the Canal Grande. The songs of the gondola – whether they are Venetian, Neapolitan, or international – that resonate among the canals. Or choruses of groups of young people on a Saturday evening, arriving for the highly alcoholic “bacaro tour”. Or the sound of new graduates with friends following the Ca’ Foscari graduation ceremonies in Piazza San Marco.

These are sounds and noises that are in part disturbances for some, but the loss of which we inevitably feel now, because they mark the difference between a vital and populated city, though with its contradictions, and its mere shadow, the viral Venice of today. Here the dominant sound – especially in the evening, when the curfew is in effect – becomes the voice of silence. Mystical, almost surreal, and at the same time powerful, almost deafening, the creator of a restlessness that pervades us all.

The possible restarting of the city still remains contradictory, between timid re-openings, youth nightlife, which is also the fruit of exasperation with the long lockdown, and the desperate desire for a return to normality which, probably, will not be the same.

Because Venice has no choice – it must find a new way of life. When the virus allows it, the controlled return of tourists will not be enough, previously hardly tolerated by many – starting with the business sectors – and now, regretted by many for being the only lifeblood of this city, now “built” to their size. The city will have to know how to reinvent itself. Find other voices, other sounds that can represent it, it doesn’t matter how far away they come from. Create new opportunities, new spaces, new modes of interaction, above all for the young, beginning with the university students, the possible residents of tomorrow. Thus filling the silence that still surrounds the city with things and people.