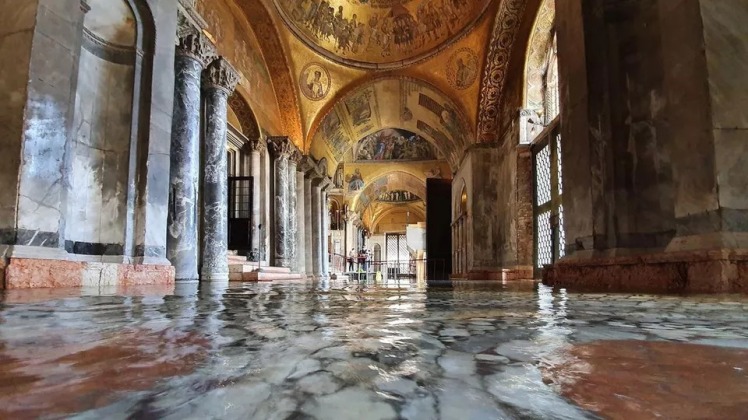 “The glass is a temporary project”. Work to begin within 30 days.

The projects to defend San Marco are restarting. After months of stop and controversy, finally a decision: the “Boeri variation”, which Commissioner Spitz supported, will be withdrawn. Work will restart with the design already approved by the Ministry of Cultural Heritage last spring, and signed by Mario Piana and Daniele Rinaldo.

Final approval will be within 30 days, then work can begin, and is projected to last four months. This was the outcome of the meeting held yesterday morning at the request of the Procuratoria di San Marco. Also participating were the Provveditorato, commissioners, the Sopraintendenza and the City.

“Excellent, we are confident”, said a finally smiling Procurator of San Marco, Carol Alberto Tesserin, “we have lost time, and the Basilica is exposed to serious risks. Now we hope to proceed soon”.

In the meantime the other project to protect the area will need to be moved forward, the project for the island of San Marco, approved the other day by the Technical Committee of the Provveditorato. This project will take at least 4 years, with a cost of 50 million Euro. At the end of the intervention San Marco will stay dry up to a tide of 110 cm. Other than this, MoSE is supposed to be completed and put in service by the end of 2021.

Yesterday in the videoconference the need to expand interventions for local defense was also discussed. “Many areas of the city go under when the tide exceeds 80 cm or even 110, for which MoSE would not be raised,” said Mayor Luigi Brugnaro, “therefore we have the obligation to defend the historic stones and culture of San Marco. But also to intervene in Castello, at the Zattere and in Cannaregio, to respond to the citizens and businesses”.  It’s a firm invitation, which has found support in the response of the Provveditorato. But where to find the resources? Brugnaro has reiterated the need to count on a stable 150 million Euro per year for maintenance of the city. “We need to restore financing for the Special Law”, echoes Tesserin. Starting with MoSE, which needs another 800 million Euro to be completed and another 100 million per year for management and maintenance, resources are required to launch a serious plan for defense “per insulae”, raising the banks, restoration of buildings and foundations, completion of the fire prevention network and of the sewer network – interventions which have now become the priority.