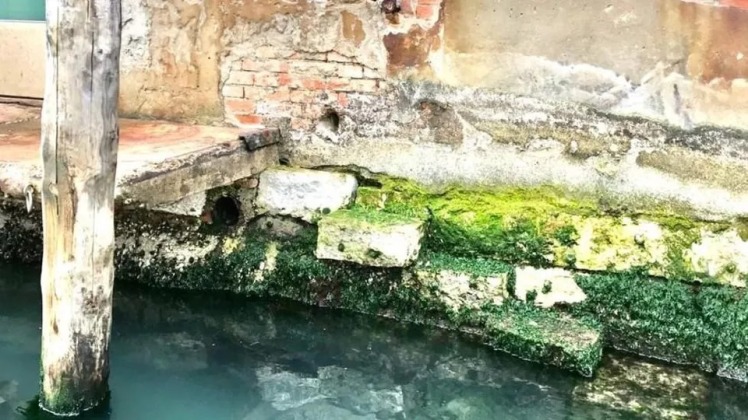 Survey by volunteers rowing the canals: “Intervention is urgent”. The damage caused by motorboat waves is visible now due to the lack of traffic.

VENICE. Widespread decay. Banks falling into pieces, scarred Istrian stone, and missing bricks. There are chasms opening under water, threatening the foundations of homes and palazzi. The cessation of water traffic, which is currently beginning to resume, had laid bare the injuries to the città d’acqua. These blows have been inflicted for years on the fragile stones and banks, tormented by motorboat waves. In some case they are unsafe and even dangerous.

Documentation assembled by a group of volunteers and environmentalists who are rowing through the canals of the city reports “the situation is serious, in some points it is truly critical”.

The largest wounds can be seen in high traffic canals. In Rio di Noale, which until three months ago was an overcrowded artery for motorboats, barges and taxis, cracks in the bases of the Istrian stone can be seen. The bricks have collapsed under the force of the waves, which washes away the mortar from the joints. Gradually gaps open up.

Fissures two centimeters wide have appeared on the cornerstones of the palazzi of Rio Noale. Scars that are not always noticed have now come to light, thanks in particular exposure of a May with no traffic, as well as the tides, which are lower than usual. “Macro and micro damage”, say the volunteers, “made more visible also by the low level of algae, due to the absence of the motorboat waves which feed it. The median sea level has lowered by 50 centimeters. The “marine municipality” seems to have returned to what we see in the paintings of Canaletto”. In reality the waters lie in waiting. Next fall the return of high waters is expected. But meanwhile everything has stopped.

The report goes on. Here, the Istrian stone of corner structures which no longer have mortar or bricks at the intersections of high traffic passages, again in Canareggio, at Santa Giustina. Not to mention Riva Schiavoni, where the stones have been displaced by the movement of the masses of water displaced by ships and vaporetti in Bacino San Marco.

“Urgent intervention is required”, say the volunteers from the environmentalist groups, “because in many places the Istrian stone is slipping into the sea”. The maintenance of the banks and stairs was once a daily concern. They would be cleaned with a brush and then a jet of water. Likewise repair of minor damage before it became irreversible damage was ongoing. This activity was discontinued twenty years ago, after the funding cuts to the Special Law, all of which was directed to the major work of MoSE.

Now some funding is coming back to Venice. The Special Law, money from the European Union, and from the Pact for Venice that was funded by the Renzi government in 2014. So it is urgent to resume the maintenance of the banks – but it is just as urgent to avoid destroying them with motorboat waves, as was happening until three months ago.