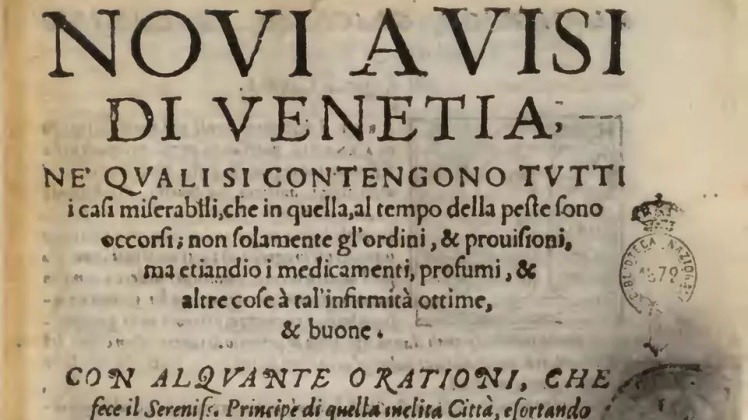 Historians Calabi, Molà and Svalduz find a parallel in the account by notary Benedetti di Rialto, published in 1577

They love delving into the memories of the city, in search of the fragments that are hiding amongst the shelves of books, documents and manuscripts. After the discovery of the manuscript signed by Marco Polo by Prof. Luca Molà, the Progetto Rialto Association, of which historians of the City Donatella Calabi of the University of Venezia and Elena Svalduz from Padova are both a part, strikes again.

This time they do so by bringing back to light a document about Venice at the time of the plague of 1575 – 1577, written in 1576 by Venetian notary Rocco Benedetti, and published in 1577.

Given the particular period in which we’re living, the scholars wondered how the city was organized in that era, and found an illuminating and extremely topical document which demonstrates that, despite the fact that centuries have passed the provisions taken by the Serenissima are the same ones being taken today. Starting on April 1, snippets of news from the past, as well as the document in its complete form will be published on the Association’s website, www.progettorialto.org.

Researching the city’s past is not only a way to carry forward collective memory, but also to take inspiration for the future. The question la Serenissima asked itself when the plague ended is in their case the same one we’re asking today: how to restart the economy?

I tell you that this beautiful city, which was always “the courteous hotel for people from all over the world”, and which after having endured other misfortunes, took the arrival of Henry III, King of France in Venice as a good omen, was completely “turned upside down by the great fury of the plague” in 1576. With this statement begins the lively account written and published in Urbino and Bologna in 1577 by Rocco Benedetti, a notary at Rialto.

At first the disease was still far away, at the Italian ports; but then it arrived in Trento and, although the city was almost isolated, it reached Verona.

And then “it spreads elsewhere”, heading “towards us” and, passing “like an invisible spirit” among the guards who continue their watch, entering Venice, where it gradually begins to spread, filling the entire population with fear.

In July the Senate and the Provveditori alla Sanità called on doctors of great fame and reputation, some Venetians, and others who come from the Studio di Padova. Some believe that it that is the plague, others posit different curable illnesses. The government tends to go with the first, who, however, were then “hated by the people”, for the misfortunes that befell families because of their claims. Meanwhile, no available doctor, surgeon, or physician can be found anymore to go care for the sick.

The Provveditori alla Sanità prohibited everyone from going in the homes of others for 15 days: neither women, nor children could leave their quarter. Behavior was diligently monitored, and if it was suspected that someone had problems with their health (however light they might be), they were immediately “sequestered at home”.

In the month of September it appeared that things were improving in the sestieri of S. Croce, S. Polo and Dorsoduro, while in San Marco, Castello and Cannaregio they worsened. Then the Senate resolved to “sequester at home” all the inhabitants of the three sestieri on that side of the Canal Grande, and on October 7 decided to “place barriers in the middle of the Rialto Bridge”, with guards who were not to allow anyone to pass who was not carrying a “permit”.

The ambassadors and the foreigners leave; the majority of gentlemen and “wealthy people” retreat to their villas. The textile businesses, who manufacture clothing of silk and wool, employing two thirds of the city, cease their production, leaving their workers unemployed. Almost all of the craft stores close, just like the merchants of San Marco and Rialto; even the brothels of Rialto are forced to close. At the beginning some of the wealthy support the poor “of their own will”. Then it is declared that all who earn 25 scudi or more in rent from a home or store must pay, within eight days, one grosso for each scudo. During the period of “sequestration”, three Senators were assigned to supervise supplies, with the task of describing the needs of the population: there were more than 100,000 people to provide for, without counting the poor, to whom they decreed giving six soldi per day for food (for a total of 60,000 ducats). Since the disease struck everybody, rich and poor, commissions were set up in all the quarters, and guards were sent to each of them who, going in the homes, verified that everybody had enough to eat “at an honest price”.

The notary Benedetti was forced to go house to house in order to write up wills. It “curled one’s hair” walking through far and wild places, and sometimes it was not possible to hold back the tears considering how “such a great city”, celebrated in the whole world for its traffic was now so “deserted”. The piazze were “clear of people”; “on the street we walk without anyone bumping into one another”; “music or songs, or other entertainments along the streets and canals” are not heard.

ONE STEP FROM THE PEAK

In the meantime there is discussion of the fact that the epidemic, after having “run here and there” was about to “reach the peak” and would perhaps lose “the power of its fury”.

One thought on “Red zones, self-certifications and everyone at home. The same prohibitions as in the time of the plague.”