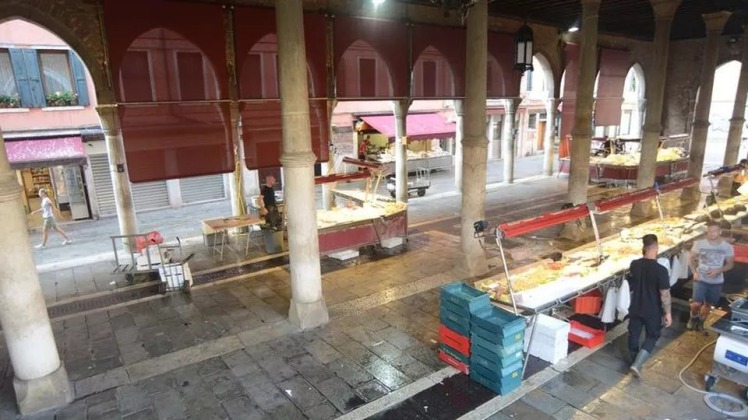 Mascari: “Money only goes the market in Mestre, the Mayor holds campaign rallies about security and then at night drug dealers and drunks rule”

VENEZIA. The Rialto Market has been abandoned to itself, and the Mayor is standing by watching. The Council’s joint Culture-Commerce Commission that met yesterday was focused on the cultural and social revitalization project that has been proposed for some time by associations such as Progetto Rialto and Rialto Novo, in agreement with the Rialto shop owners. But it quickly became a harsh denunciation by those same owners of the conditions of decay and abandonment which are developing in the Market, which is in serious economic trouble, directly calling out the Municipality and in particular Mayor Luigi Brugnaro. Leading the criticism was Iginio Mascari, spokesman for the Rialto merchants as well as representative of the historic specialty food and spice store in the area that bears his name.

“The market has been left to founder for years, and supermarkets have been indiscriminately allowed to open in the area” attacked Mascari, “which have driven out the neighborhood stores and diminished the presence of residents as customers. But now I ask: is there really the will to save the Rialto Market? Why is it that I and spokesman for the fish vendors Andrea Vio have to go the Municipality and wait a month for the Mayor to see us to talk about the market’s problems? During the last election campaign Mayor Brugnaro held a “rally” for an hour to talk about security at Rialto. What security? Don’t try to fool us, in the evening Rialto is in the hands of drug dealers and drunks, but none of the multitudes of security officers hired by this administration. Where was Mayor Brugnaro on 12 and 13 November, when we kept the stalls open with water up to our calves? He didn’t find the time to come and see the condition of the market. And why spend 750 thousand Euro for the Piazza Barche market in Mestre, which is 80% managed by Sri Lankans, and not a dime for Rialto, which is falling to pieces? Do we have to have a demonstration to be heard by the City?”.

Less controversial, but just as critical, was Andrea Vio, representative of the fish vendors: “The Rialto Market is the pulse of the city, and it is seriously suffering, but the Municipality isn’t spending anything to help it, in contrast to what it’s doing for the one in Mestre. We ask to be involved and to be heard, and to contribute to its revitalization”.

We will deal separately with the proposals of the committees for use of the area of the Palazzetto delle Pescherie, and of the response of the Fondazione Musei Civici. Many councilors of the majority and the opposition spoke (among whom Giovanni Giusto, Silvana Tosi, Monica Sambo, Elena La Rocca, Rocco Fiano).

There was general solidarity with the Rialto owners and uncertainty over the Municipality’s intention to launch an international call for ideas for managing the area, because this would risk entirely losing the course of participation and of knowledge of the city, and that individuals’ economic interests would prevail and not those of the city.

Monica Sambo requested an urgent commission with the Councilor of Commerce to identify any regulatory changes to propose for revitalizing the pescheria and the market. Municipality of Venice President Giovanni Andrea Martini expressed his support for the revitalization projects proposed by the committees and underlined how damaging for the city is the fact that now for two years the city has lacked a Councilor for Culture and one for Commerce, with those powers retained by the Mayor, such that the Administration’s representative in commission yesterday was the Chief of Staff Paolo Romor.

“The fact that the Mayor has held on to these powers is a sign of caution and not of neglect”, retorted Romor, “and regarding the request for international displays of interest for the recovery of the Rialto area perhaps I was not clear, because the process for preparing the call will be done publicly, in agreement with City Councilors, associations and citizens who want to participate in its ideation. Ideas about the type of activity and the characteristics of the interventions must naturally start from the city and also from sharing with the market merchants themselves”.