It’s the ultimate nightmare. 30 years in Venice and I have never before seen an acqua alta of this sort. At 11:30 PM it reached its maximum level: 1.87 meters, just below the record peak reached during the catastrophic “Acqua granda” of 1966, as can be seen in this photo:

The Mayor says the cause is climate change – but what is behind all this?

I found it interesting to note that the Mayor of Venice has, first of all, discovered climate change and, second of all, has acknowledged that the system of mobile barriers to combat acqua alta, MoSE, still does not work.

On TV you will have seen the images of the acqua alta. Here is why, at this point, it is important to clarify that the acqua alta in Venice was created by man: the delicate equilibrium of the lagoon has begun to falter ever since the excavation of the Canale dei Petroli, a deep canal for the passage of oil tankers. The currents and morphology of the lagoon have been radically changed by this canal: since then, every time the wind pushes the sea into the lagoon, acqua alta erupts in the city much faster. The canal, furthermore, has swept away the sandbars, marshy islands which act like sponges when there is high water.

Canals for the passage of oil tankers and cruise ships

Venice is situated in a lagoon that is no deeper than 1.5 meters on average. It is not made, therefore, for boats with deep hulls. However, they became inevitable when, during the Fascist era, a group of able entrepreneurs launched not only Porto Marghera, but also the “municipality” of Venice. This constrained the lagoon city to accept a forced marriage with the mainland that remains the law today: the great majority of residents of the Municipality of Venice live on the mainland (180,000), and Venetians, now numbering just 52,000, are the minority – which explains why they are not able to express their political will at the ballot box.

The Canale dei Petroli was excavated to allow oil tankers to reach the port – and even then it was seen as a primary cause of the devastating acqua alta of 1966.

Since then the industrial port has been enhanced in an increasingly consistent manner, and the canals that cross the lagoon have been excavated to increasingly greater depths, most recently above all to allow the passage of cruise ships. Only a short time ago there was discussion of the excavation of another canal for cruise ships.

Because of the deep navigation canals the morphology of the lagoon has been changed and erosion has dragged the lagoon floor out to sea, to such an extent that the lagoon is increasingly transforming into a branch of the open sea.

The role of the MoSE system of mobile dams

The system of mobile barriers called MoSE has given a further boost to acqua alta: the mouths of the port have been made deeper and narrower. The consequence has been that when there is a high sea more water is pushed in the direction of the city, and much faster than before – and it then recedes more slowly.

According the opinion of Venetians, the dams will never work. Most recently, they were supposed to be tested just a few days ago, on the anniversary of the beginning of their construction: they didn’t work. Thanks to an underwater drone it has been found that the gates are already completely full of rust and encrustations.

Since 1983 the partnership Consorzio Venezia Nuova, an association made up of private construction companies, has been overseeing the project. A monopoly. As a German, however, I only discovered this later on: behind the nice name Consorzio Venezia Nuova there is not, as I thought somewhat naively, an independent scientific committee, but rather an association of private construction companies in Northern Italy, a business partnership, a monopoly that was entrusted with the completion of the dams without even having to offer a bid.

I immediately thought: “how strange”. “Fare il lupo peroaio”, alla veneziana. In fact, what does it mean to be a construction company in the North? It means pouring as much cement as possible in the lagoon. Put more precisely, 8 billion Euro worth of cement.

8 billion Euro thrown in the sea

The project has made a whole group of politicians happy, from the right and the left, all pocketing bribes amounting to a billion Euro. From the beginning experts have pointed out that MoSE was already obsolete before the work even began. And today they still explain that the dams, even if they are put in service, will not provide a solution. The barriers cannot remain closed all day because the lagoon requires continuous exchange with the sea. Otherwise it would end up becoming a sewer.

In 2014 a network of bribery surrounding the MoSE project was uncovered. 35 people, including politicians, business owners and officials were arrested, and in a short time ended up behind bars, although they’re free today. Among them were the former Mayor of Venice Giorgio Orsoni and the former Regional Governor Giancarlo Galan. The Procura has also investigated another 100 people on charges of abuse of office, corruption, campaign finance violations and money laundering. With this cartel set up around MoSE, then Procurator General Nordio, officials and politicians allowed themselves to be systematically corrupted – as much at a local level as at a national level. The Catholic Church was even included, having received funding for the Fondazione Marcianum of Cardinal Angelo Scola.

And that is how it could happen that 53 years after the devastating acqua alta of ’66, nothing has been done to save Venice, and that the day before yesterday another catastrophic sea was at the point of sending the lagoon city to ruin: the maximum average level was 1.87 meters, but in lower areas of the city levels were recorded at 1.90 – 1.95 meters.

It is all so sad – climate change is undoubtedly accelerating the problem, but even worse is how there was no attention paid to sea level rise in the calculations for building the mobile dams. Surely even the Mayor of Venice would say to himself: “It’s always good when you can blame climate change – always better than holding the corrupt class of politicians and businessmen accountable.”

The acqua alta, in short, is a catastrophe. Created by man, however. 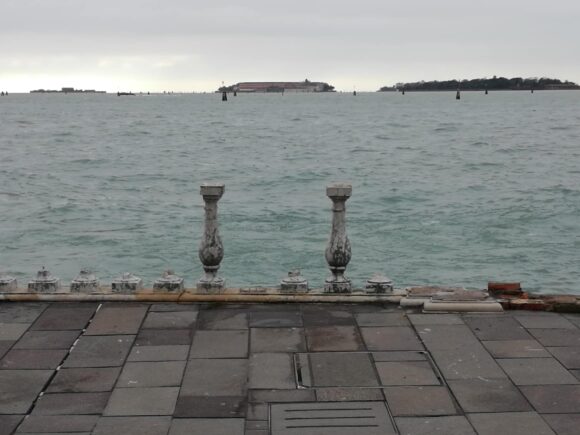 One thought on “Acqua Alta. Created by man. By Petra Reski”