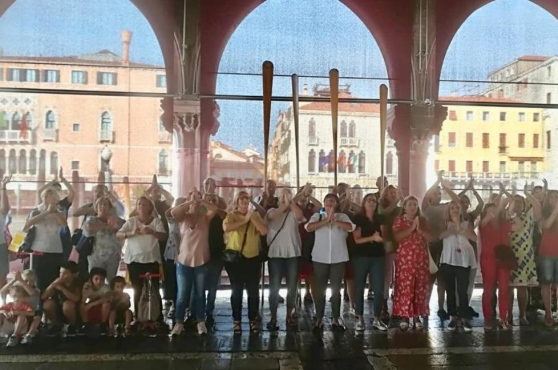 “Venice is a fish, Rialto is its heart”: flash mob in the Fish Market. On the 23rd everyone can sing for the future of the city.

VENEZIA. “Venice is a fish, Rialto is its heart and with its closure Venice dies”. This is the chorus of a song dedicated to Venice which yesterday, at 16:00, almost one hundred people sang in the Rialto Fish Market, in preparation for a video. There were women, men, commuters from their after-work trains, a sister from the Order of the Salesie, as well as many children seated on skateboards.

Participation in the people’s choir was spontaneous and shared via Facebook. The invitation was sent by Ground Zero, a musical group featuring Alessio Trapella (Le Orme), Gioele and Andrea Vio, Battista Molin, Lorenzo Miatto, Michele Bon, Betty Sfriso and William Carrer. The group’s musical roots are in rock and blues, and they say that they have “an ambitious project for the city”.

Andrea Vio, a fish vendor at Rialto for more than 40 years, explained the bitter reality. “Music is the only weapon in our fight. We love the city, and so we organized the event. We are people who want to continue living here, and tourism is taking Venice from us. Here at Rialto we don’t see the City government. The Market is a thousand years old and the stalls have gone from 19 to 5. We have a businessman mayor but we are waiting for his ideas. In the meantime, in collaboration with Marino Folin, who is ex-rector of IUAV, we are working on a project which we will present to the Administration”.

He adds: “The vital lifeblood of small business is being allowed to dry up in favor of supermarkets. In everyday life the baker, the milk seller, or the butcher aren’t seen anymore. Rialto still survives selling fish but it is short of breath”. As we speak the first notes of the song and the recording begin. The people’s choir repeats the chorus, clapping the rhythm with their hands.

All around tourists and residents grouped around, applauding approvingly. Andrea Vio explains the song: “The song is a gift of love. It speaks of the beauty and the uniqueness of Venice, which should not be lost because we would also lose a part of ourselves. The city is already missing the sight of families”.

Around the fish market more Venetians arrive, singing and applauding.

Luisa Milo lives at San Bartolomeo: “I love this city very much but I’m beginning to want to leave. Unfortunately I will have to leave because my daughter doesn’t live here anymore”.

Carla D’Este, 72 years old: “There is much that must be done to support the city. It hurts me to see this decimation of the residents. At times I find myself on Strada Nuova crying because I remember the Venice of when I was young, and I compare it to the Venice of today”.

One thought on “In Venice, a song to save the Rialto Market”