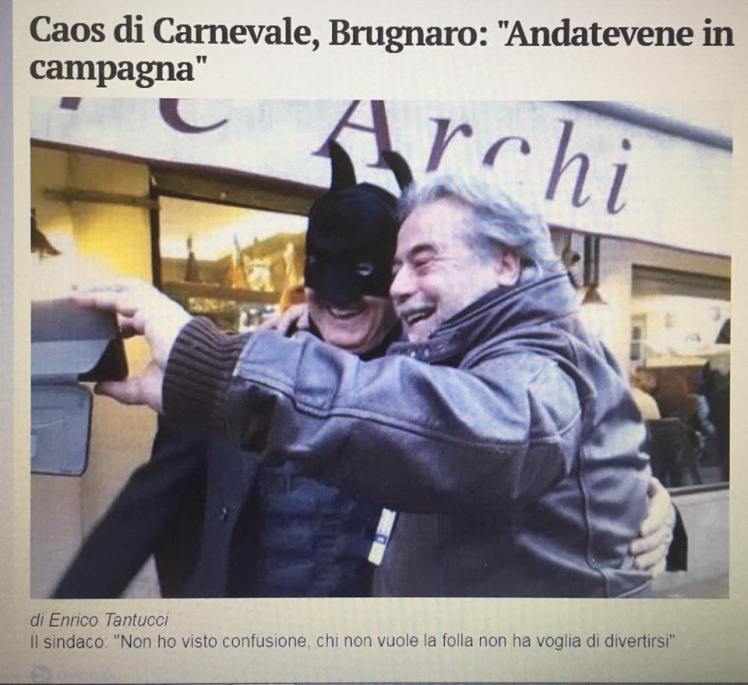 (Ed. note: the man on the left in this picture is Mayor Brugnaro, in costume for the opening of Carnevale. The headline says: Chaos at Carnevale, Brugnaro says “Go to the countryside”. The tag line quotes him as saying “I did not see any confusion, anyone who doesn’t like the crowd doesn’t want to have fun”)

In less questionable times we wrote: “Politics is often made by small talk and chatter, but there are measurable data which we can use to refute lies with numbers, or, on the contrary, to surprise the sceptics with something positive. This group exists, essentially, to defend the rights of those who want to remain, return or move to Venice, and some success on this front might allow us to close an eye to the many small flaws (or lack of style) of the new Mayor”.

As a “litmus test”, given the campaign promise of 30,000 new residents (!), we propose to review the exact number of residents, which we have continued to monitor as we had already been doing, to see if with Mayor Batman there has at least been a reversal of the trend.

This is the balance at two and half years since his installation as Mayor (and therefore halfway through his term):

The two Municipalities on the water (Venice and islands) had 84,738 residents; at the first of January 81,827 remained.

We did not lose this many even during the “tears and blood” provisional commission of Zappalorto, and the trend has grown even in comparison to the awful previous administrations. What amazes us is the loss of residents at this pace notwithstanding:

Given that these numbers speak for themselves, we will not add more: rather we offer this quote, which we used at the time and which remains relevant to today’s dramatic reality:

“Nobody ever went broke exploiting the public’s credulity” (Phineas Taylor Barnum, creator of the Circus bearing his name)