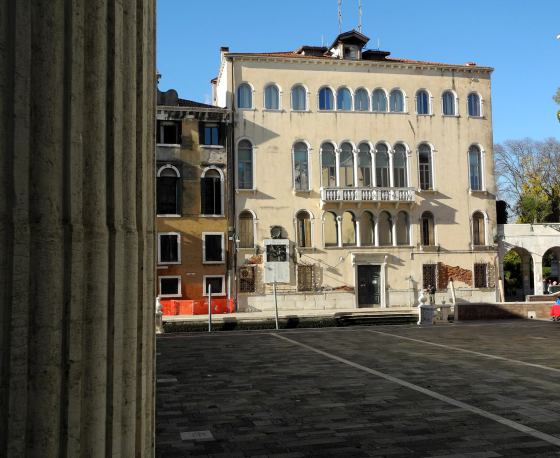 As I write the City Council of Venice is debating the sale of an alarming range of public buildings, including some like Palazzo Papadopoli (above) have somehow already managed to be sold – schools being sold of to become hotels is the City’s plan.

Veneziamiofuturo/Venicemyfuture is there now and they brought with them the following appeal.

APPEAL TO THE CITY COUNCILORS

FOR A LIVING VENICE

“What time does Venice close?”

Years ago this question from a tiny tourist to her parents would have made one smile.

Now, however, this phrase no longer inspires hilarity for anyone, because it begins to resemble reality, because tourism is consuming the life of the historic city, because the residents are leaving.

For what reason? Try to live in a place where the stores for residents are replaced by those selling junk for tourists, a place where the artisans close down, in which the campi (plazas) where our children play are taken over by outdoor seating for restaurants and bars.

Try, if you are a couple that wants to have a family, even to just start living in a city where you cannot find apartments for rent or for sale because it is more profitable to rent them to tourists or transform them into hotel annexes.

But that which is saddest to those who try anyway to live in the historic center of Venice, is that the recent administrations have given the impression that they favor this process. In the last few years it has in fact become widespread with never before seen growth in tourist rentals and locations and a rise in the number of conversion of buildings to tourism use.

We therefore have a city that now counts less than 54,000 inhabitants (a third of what it has always been home to through the course of its long history) that day after day sees the depopulation of the plazas, the stores, the apartments, the services, and which is being consumed by more than 30 million tourists.

And here we are today. Today, dear City Councilors, you must decide whether to sell palazzi and other PUBLIC buildings to the tourism industry.

They are called “public”, which means “belonging to the community”, not to the Administration, and even less to “this” Administration, which in that role should instead conserve and manage public properties and not sell them.

But beware, however, because this decision could represent a point of no return in the process of abandoning the civic life of the historic center of Venice.

Why, then, do we not try to avoid this sad destiny for a place which the whole world envies for its magic and its history? Why give in?

I ask you therefore for a demonstration of… I would like to say “of love”, but love is not something that can be requested. I ask then for a demonstration of RESPECT, that which this city deserves, for its buildings and for the life which is still within them. Do you recall? “Enjoy, Respect Venice”.

I ask you, dear City Councilors, as a gesture of respect for Venice, to NOT SELL OUR BUILDINGS.

Because once they are sold they will never again be public.

Because if you sell them, you will not be remembered for balancing the budget, but for having impoverished Venice.

Because selling public palazzi to be made into hotels doesn’t mean only attracting tourists, but also driving out the inhabitants.

Because conserving our public buildings would give this wonderful city the hope of a different destiny that that of ghost quarters, of hotels everywhere, of a city of toys.

Dear Councilors, please, act, so that years from now we might hear it asked: “what time does Venice close?”