The fifth meeting of the series Six Months, Six Sestiere, organized by Gruppo25Aprile, will take place in Dorsoduro on Dec. 16. This follows meetings already held in Cannaregio, San Polo, Castello and Santa Croce. The ‘grand finale’ meeting is set for San Marco in January.

The Dorsoduro meeting is being held in cooperation with Viviamo Venezia. Among the topics that will be covered at this meeting, as at the others, will be; Housing, Jobs, Volunteerism and Personal Service, as well as Security of Navigation. In attendance, to add their voices to a growing work of opinion and proposals, will be representatives from a variety of local organizations:

The meeting will also be broadcast live on local station Radio Vanessa.

According to a statement Gruppo25Aprile’s web site, these meetings are a reminder that the UNESCO deadline for designating Venice a World Heritage Endangered site is as soon as February: “Six meeting in six months, sestiere by sestiere, to not waste the window of opportunity created by the UNESCO resolution of July 14: Italy was given until February to respond to the points in the resolution. This deadline could be seen as a menace (the threat of ending up on the Endangered list) or as an opportunity; we have chosen the second option. With the opinion campaign called #Veneziamiofuturo we are meeting in the sestiere, one by one, in an operation both unpublished and never before attempted; public meetings open to all, sestiere by sestiere, to elaborate a series of requests and proposals that can finally give answers to our too many unresolved problems.”

Once all the meetings are completed the results will be compiled in to a document to be sent to the City Government. 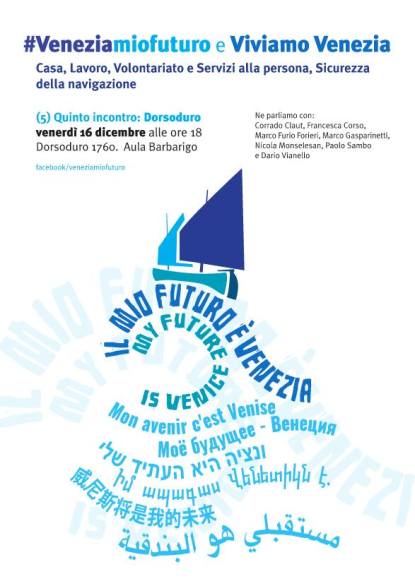